Corrugated iron, for many of us, instantly evokes images of tattered barn roofs, bare industrial headquarters or stark Scandinavian homes. Rightly-so considering its seemingly exclusive use as a durable and practical building material. In the last decade there has been a rise in the use of corrugated iron in residential properties around the globe. Despite its unwavering use as a mass-produced building material, the stark nature of the material is now being seen as its appeal, rather than its drawback.

Dissimilar from cheap alternatives like aluminum and vinyl siding which seem to churn out ill-thought-out edifices before it’s too late, corrugated iron’s expanding market has been a largely slow and intentional one. The apprehension held by consumers in the residential market has created a sort of architectural bottleneck in the sense that there is only a certain collection of architects who are able to consistently satisfy consumer expectations.

On top of that, there are only a handful of consumers who are open to the idea of corrugated iron making up a part (or whole) of their new home. But corrugated iron has proven itself superior than other cheap building materials because of its unapologetic use as exactly what it is, rather than being used to mimic a more expensive material.

In the early 20th century newly built residential homes built of corrugated iron were scarce, but did exist after years of exhibitions demonstrated the versatility of the material. In the following decades you’d have better luck at a military outpost in Britain or France where rows of Nissen Huts made of corrugated iron sheets were erected during World War One and Two.

More efficient production allowed iron sheets in the former years of the industrial revolution to be mass produced and widely distributed from Britain. Defining events like the California and Australian Gold rushes and WWI and WWII accelerated the improvement and demand of cheap, durable materials that could be transported easily — corrugated iron fit the bill.

Fast forward into the 21st Century and the incorporation of corrugated iron into residential properties isn’t so uncommon. Take award-winning architect Glenn Murcutt for example. Murcutt has made a name for himself across the world through his particular attention to the topography and climate of the regions he works in.

Corrugated iron’s ability to resist temperature change allows the interior of structures to remain cool even in extreme heat conditions, while its fire-proof quality only adds to the practicality of the material. Architects now realize, perhaps more than ever before, that the use of materials resistant to extreme and unpredictable weather conditions are just as important as sustainable ones.

Even with the expanding use of corrugated iron, the versatile building material has maintained its respected place in the world of mega-warehouses and modest barns. We’ve complied just a few projects which demonstrate the ingenuity arising from residential projects which have incorporated the stark material into attractive residential designs. 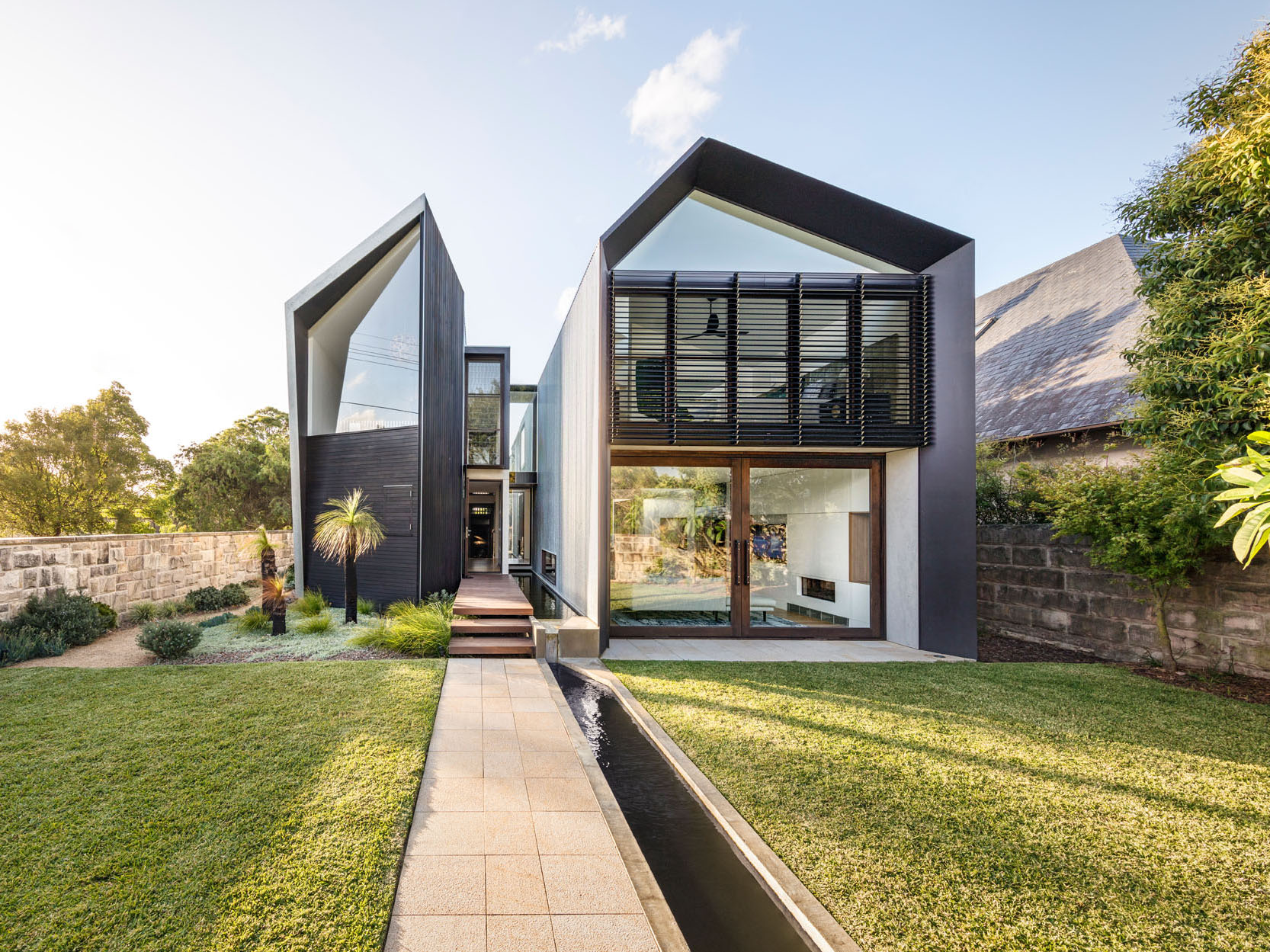 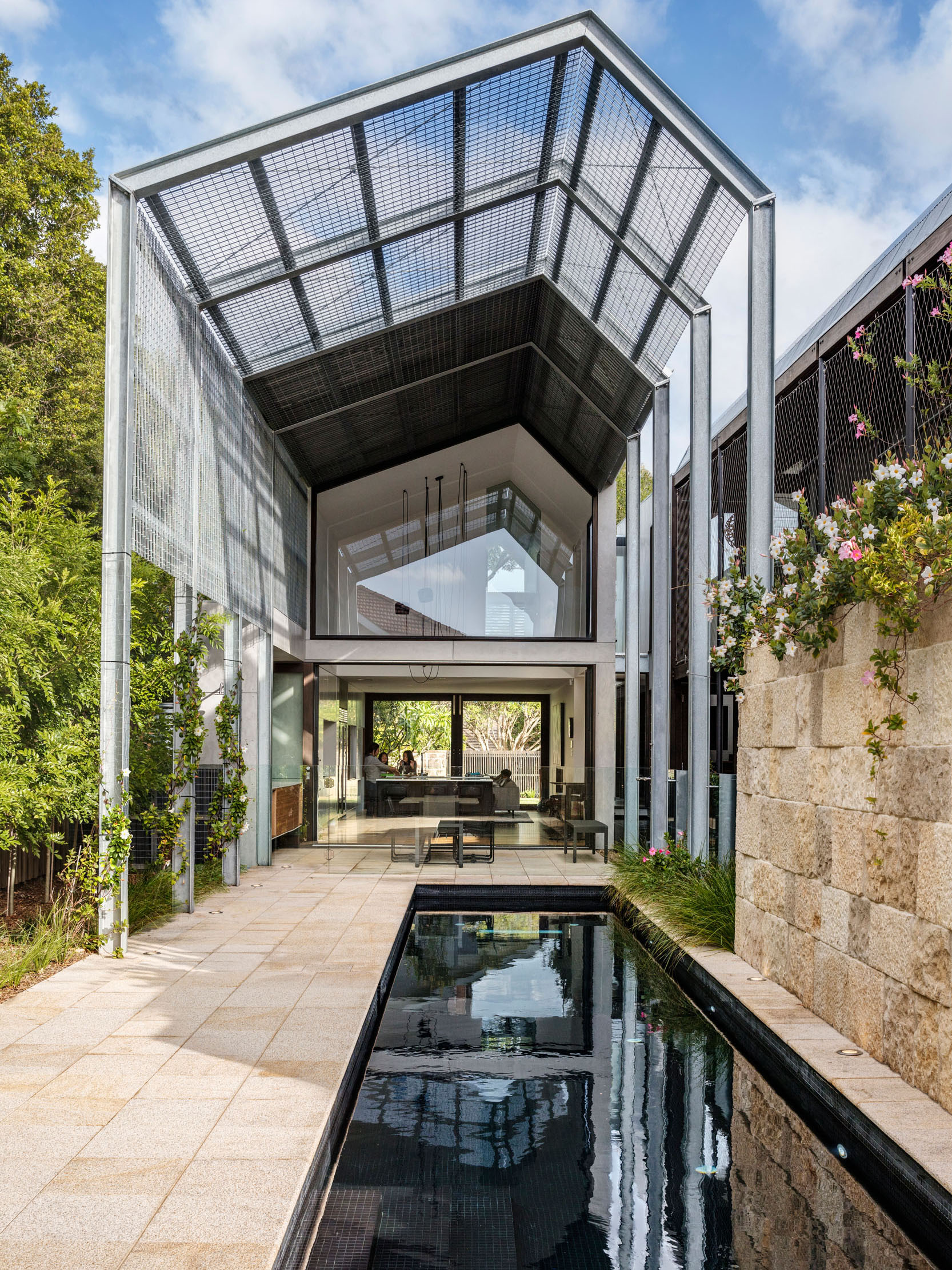 The delicate balance of wood and iron used throughout the Iron Maiden house design has given the hard lines of the exterior a satisfying texture. The vertically arranged wood planks at the entrance along with the uninterrupted sheets of corrugated iron draw the eye upward, while the rear of the house has used warm tile to offset the geometric iron structure. 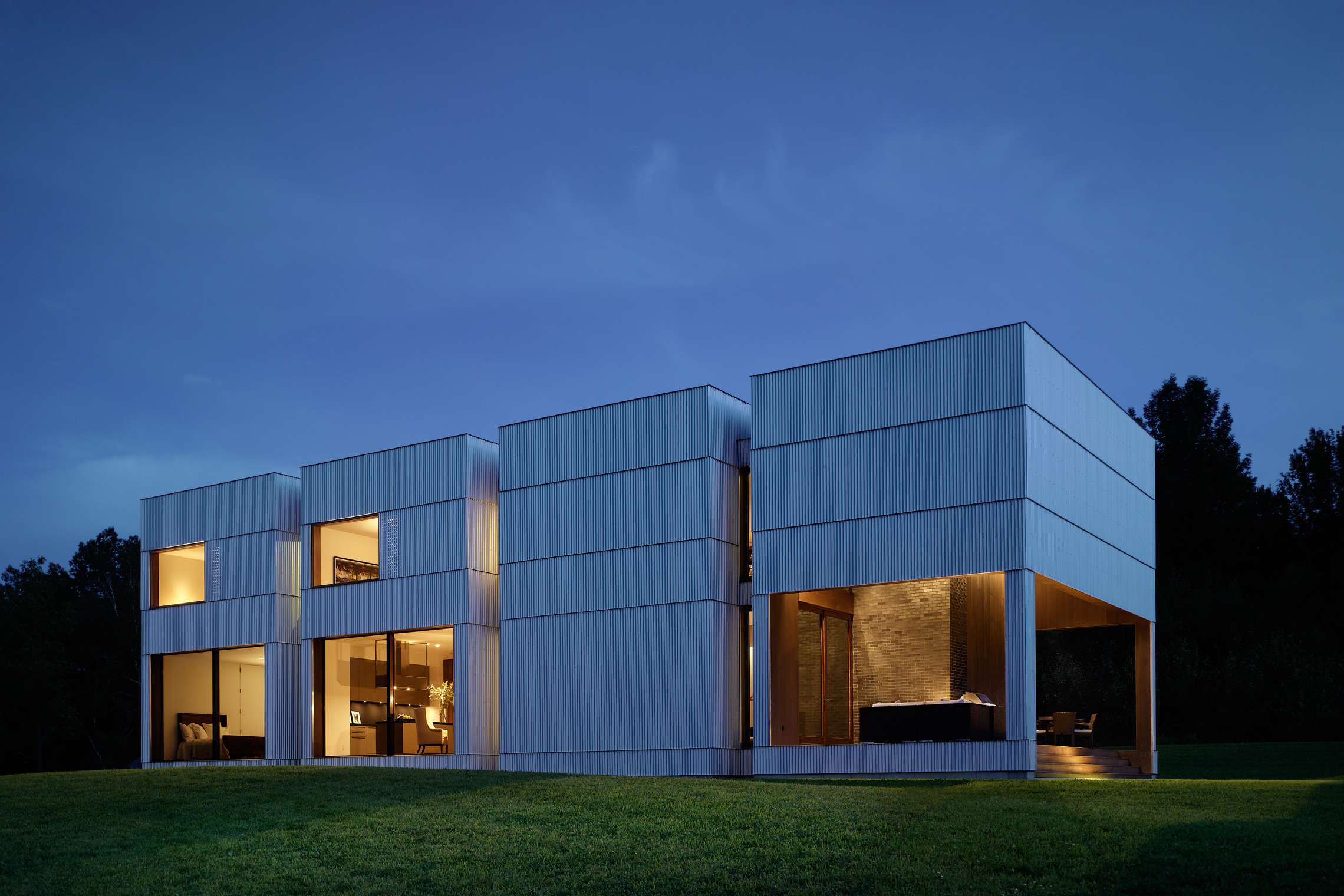 Made up of four boxes connected by smaller passageways, the iron-clad design by HHF Architects sits in stark comparison to the lush greenery of upstate New York. Both the Tsai Residence and the accompanying guest house commissioned two years later show how simple architectural design is buttressed by simple materials. 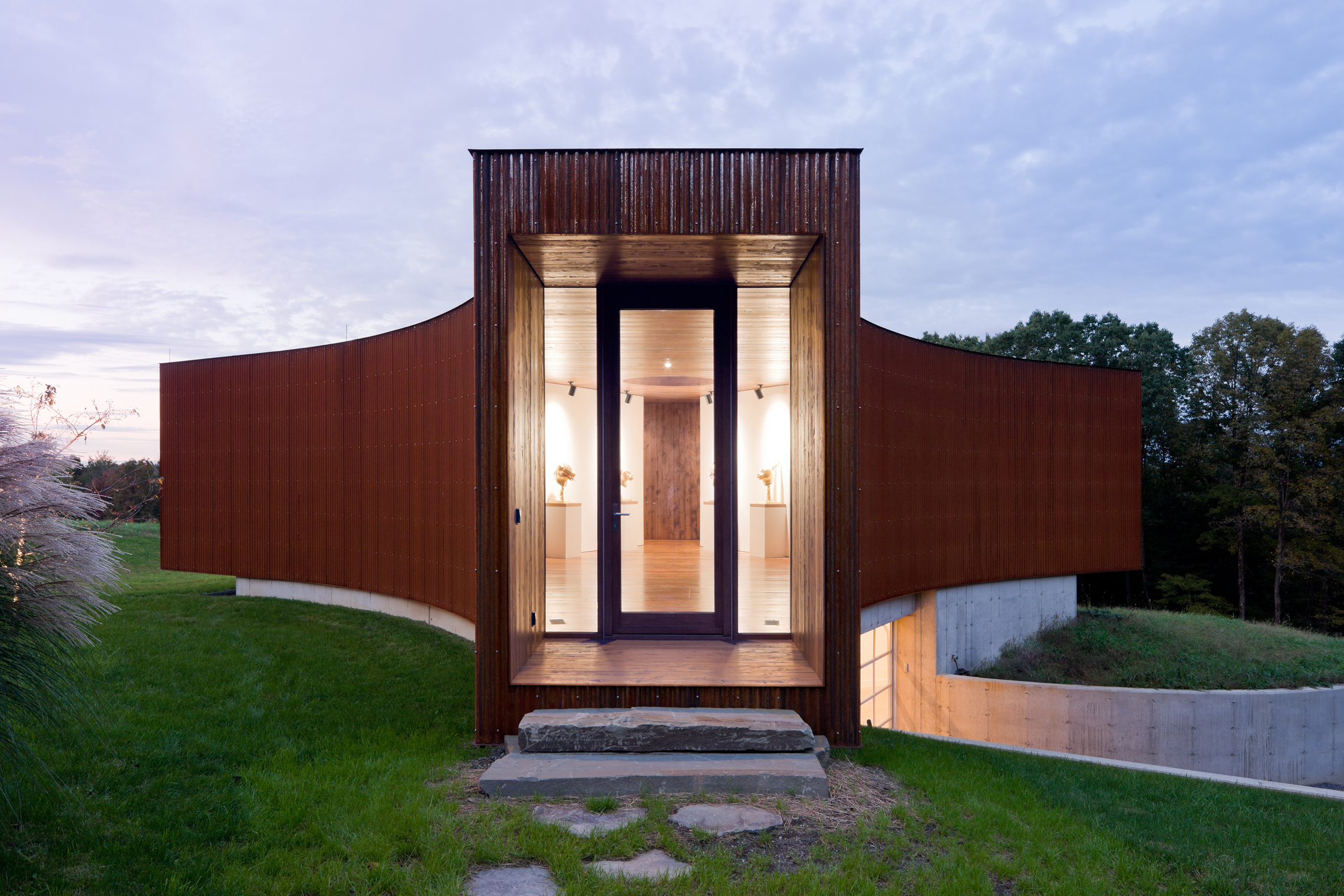 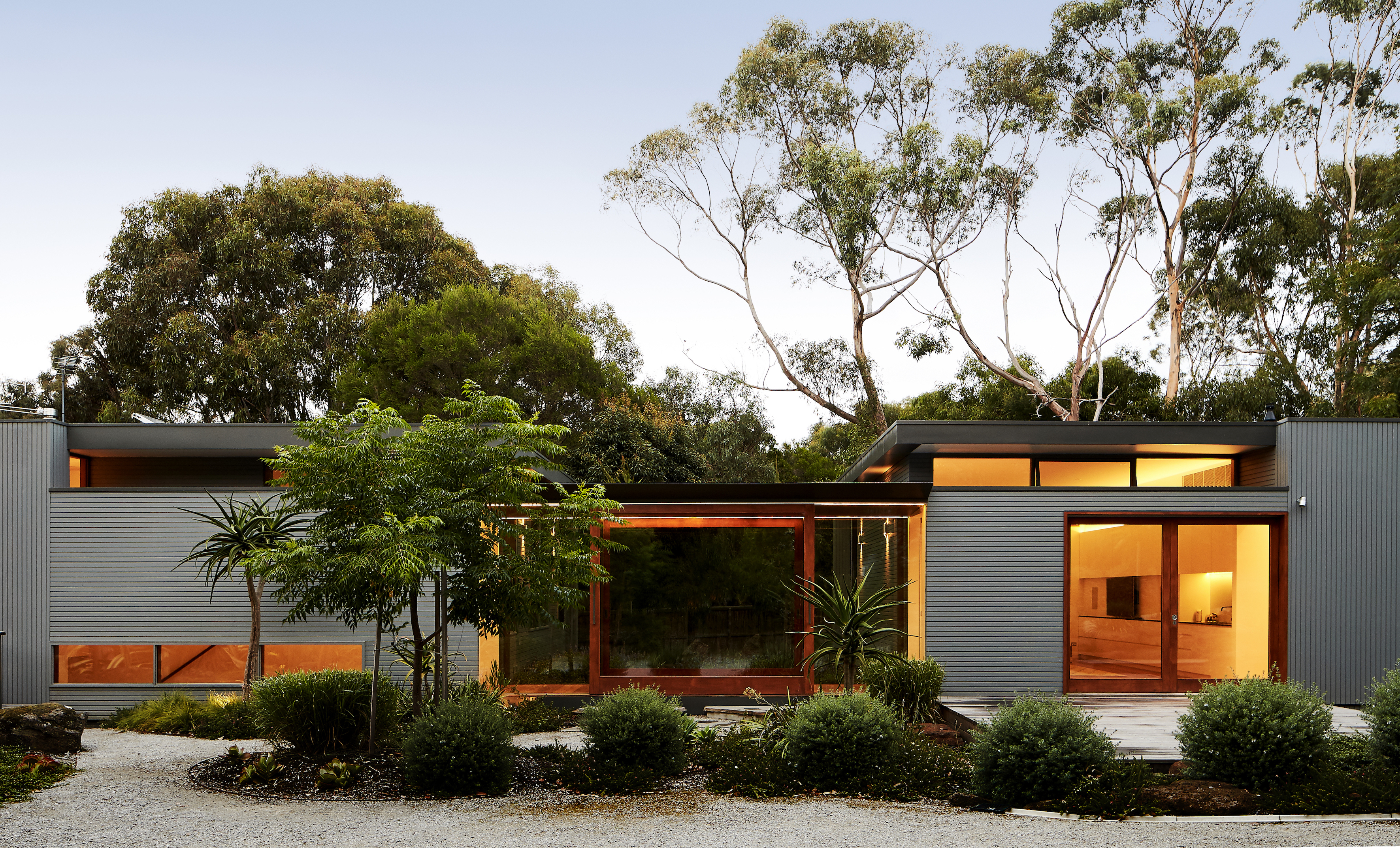 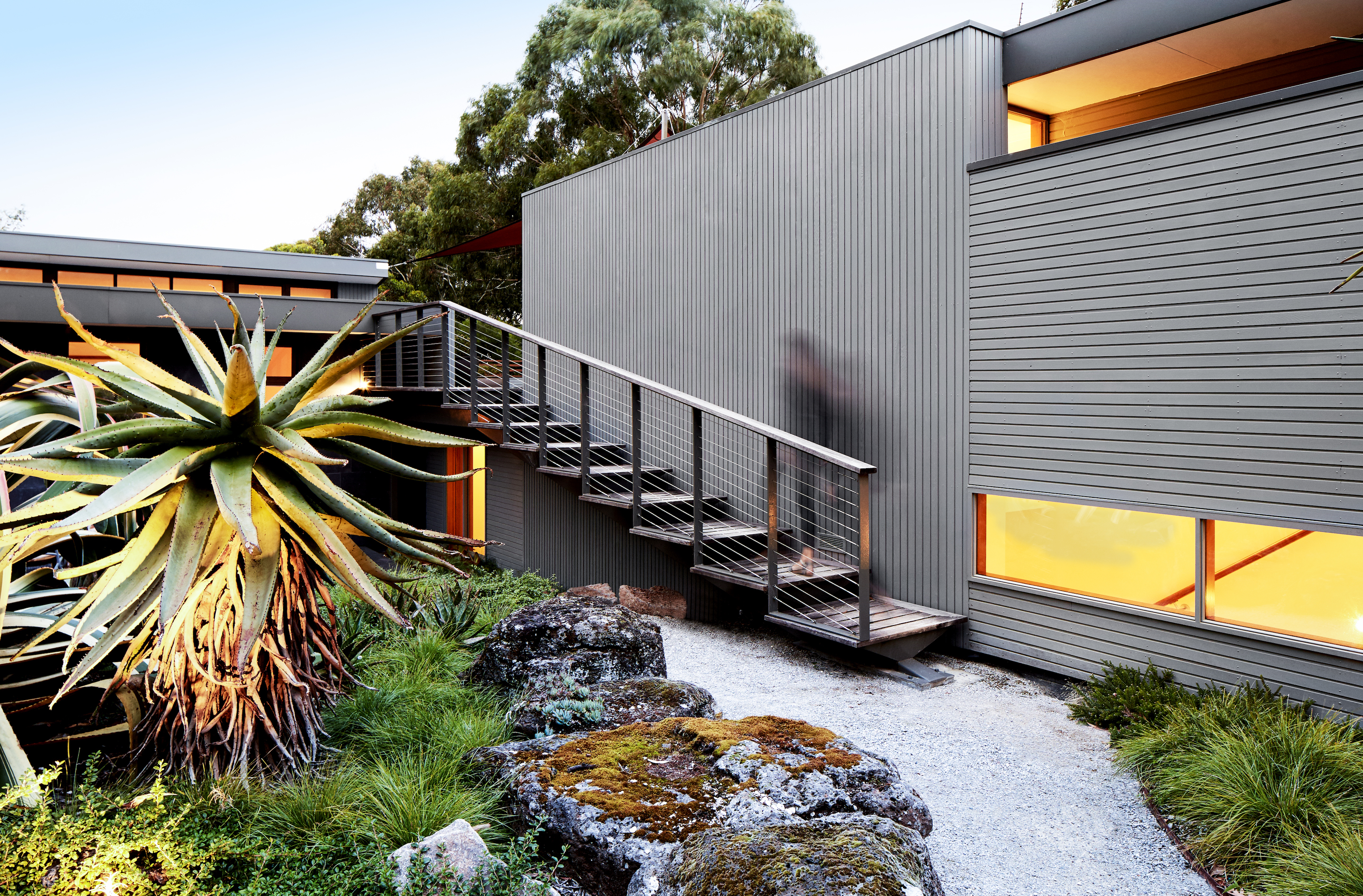 The Shoreham House was a successful effort to renovate a previously dysfunctional home into a well-landscaped, sustainable and overall practical re-design. The long sheets of iron siding complement the intricately landscaped and low-lying home while large double-glazed windows open-up the interior. 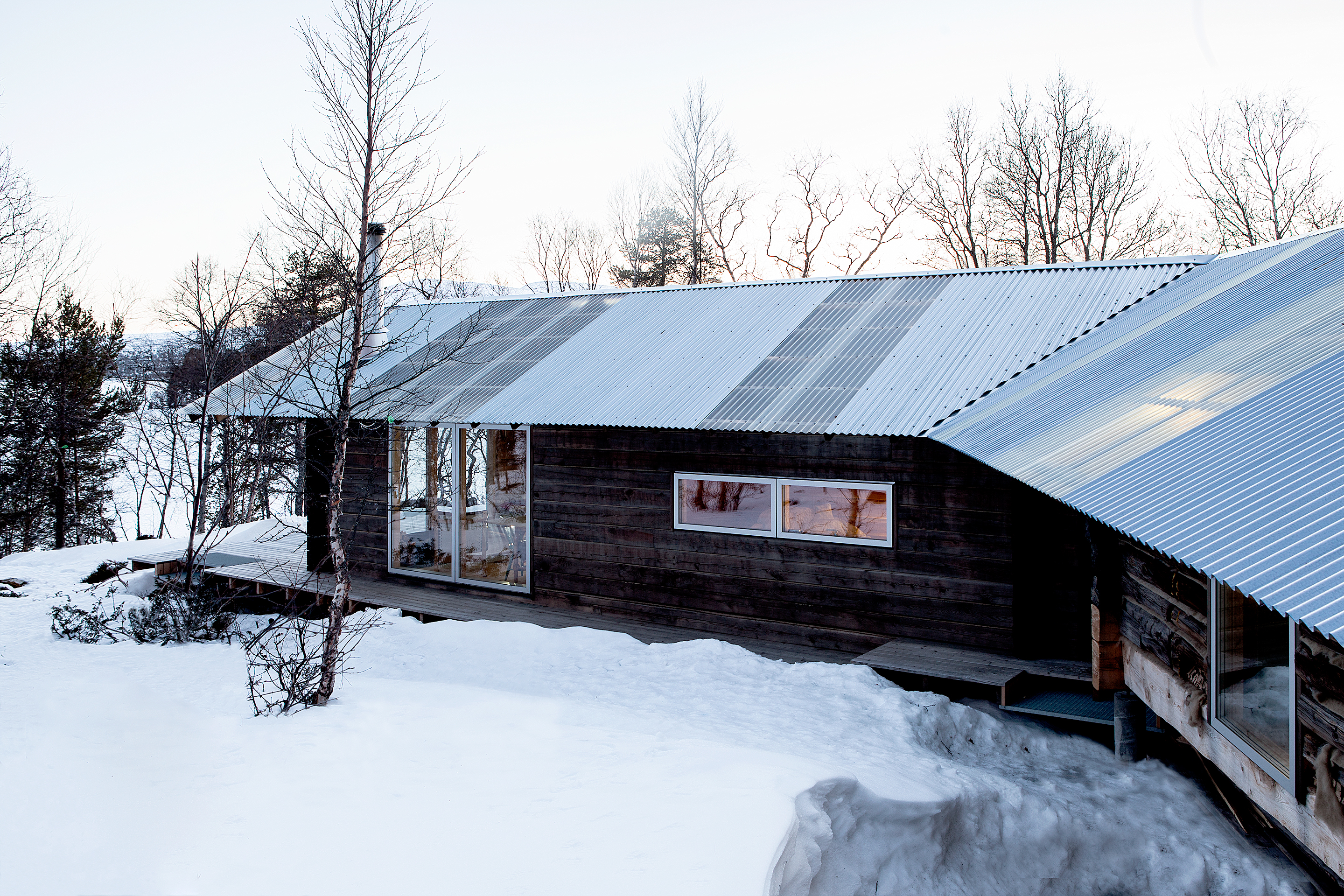 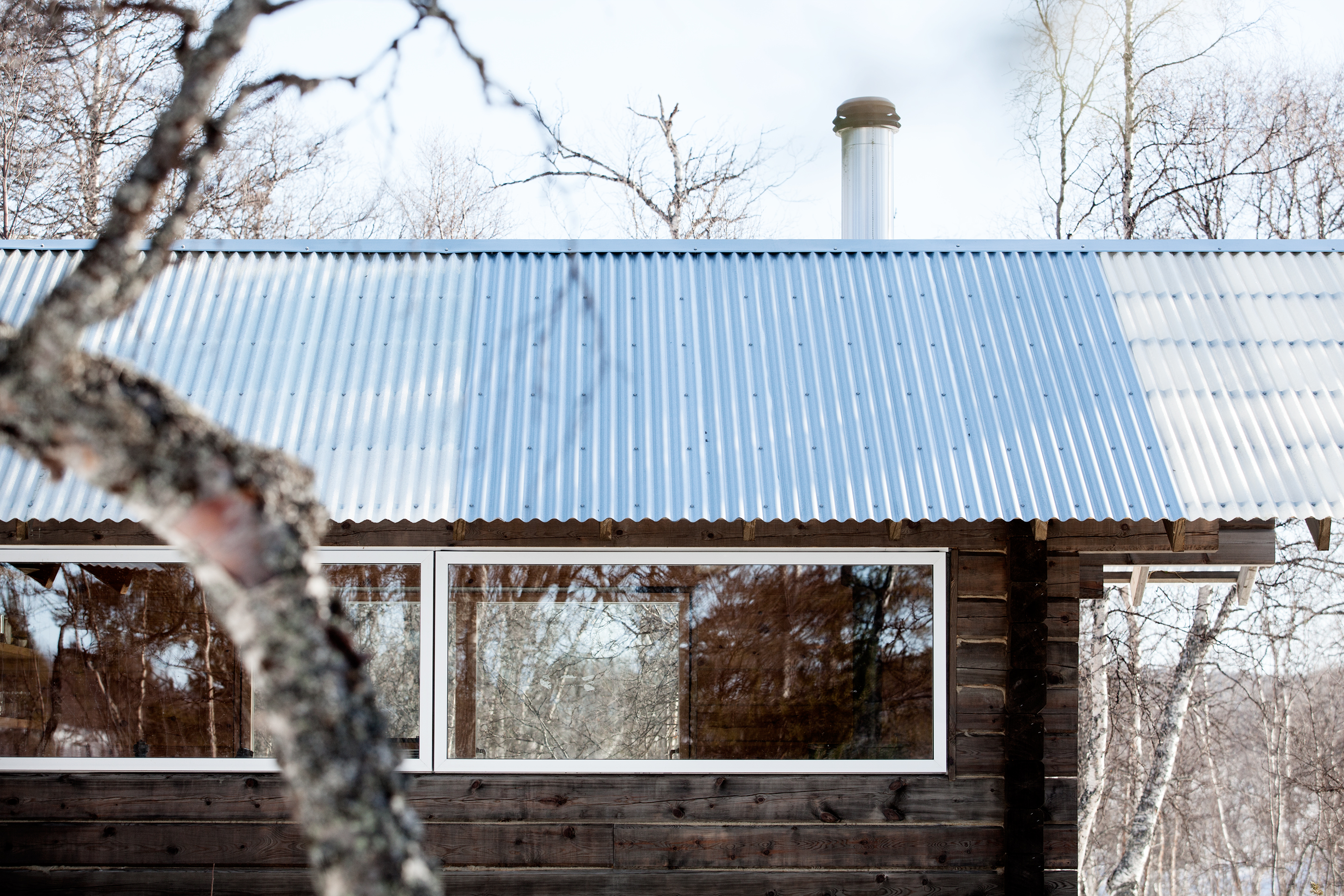 Perched along the shores of Lake Femunden in southern Scandinavia, this captivating structure was originally two small log cabins. The now connected cabin now sits atop a cantilevering deck and is matched by a corrugated steel overhanging roof which has created a protected outdoor space (translucent panels have also been added in some areas to maximize light inside the cabin). The challenge of the project was making the “traditional construction work with and create a dialogue with the presicion of the corrugated iron.” 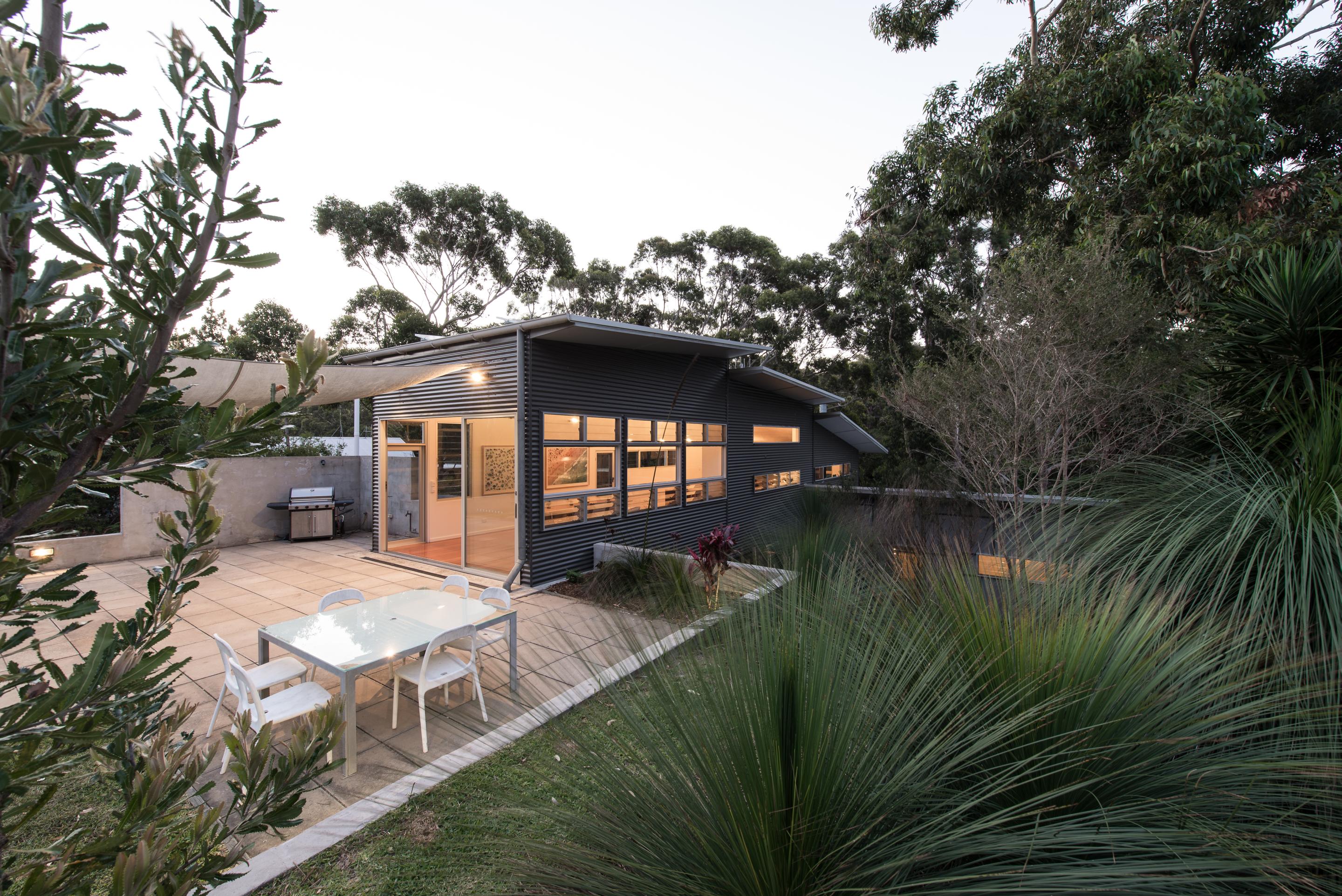 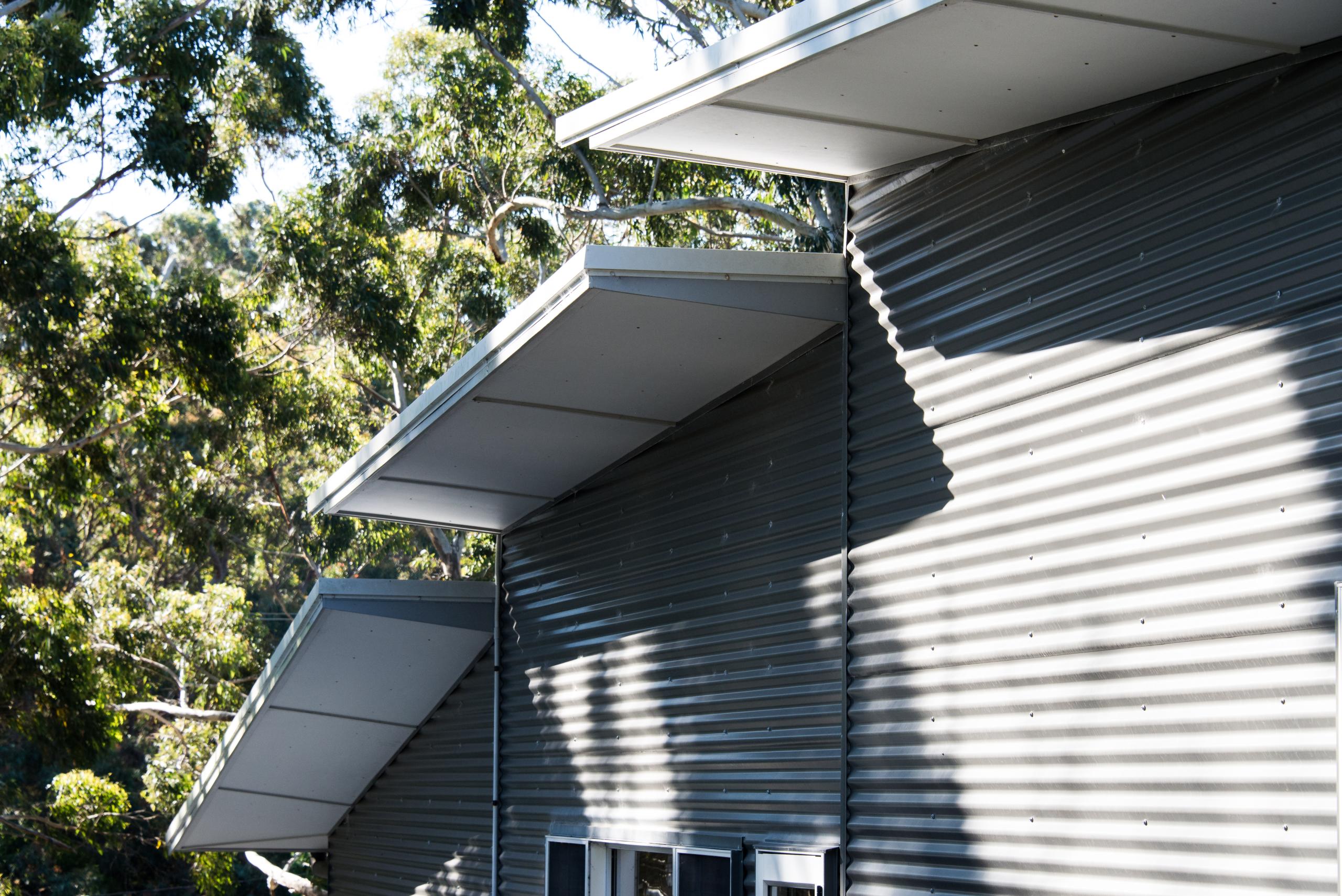 The Seal Rocks House Two sits among the trees just south of the coastal town of Forster Australia. The simple structure mimics the retro feel of the early years of modern architecture yet represents many of the simple architectural methods which dominate this part of the country. 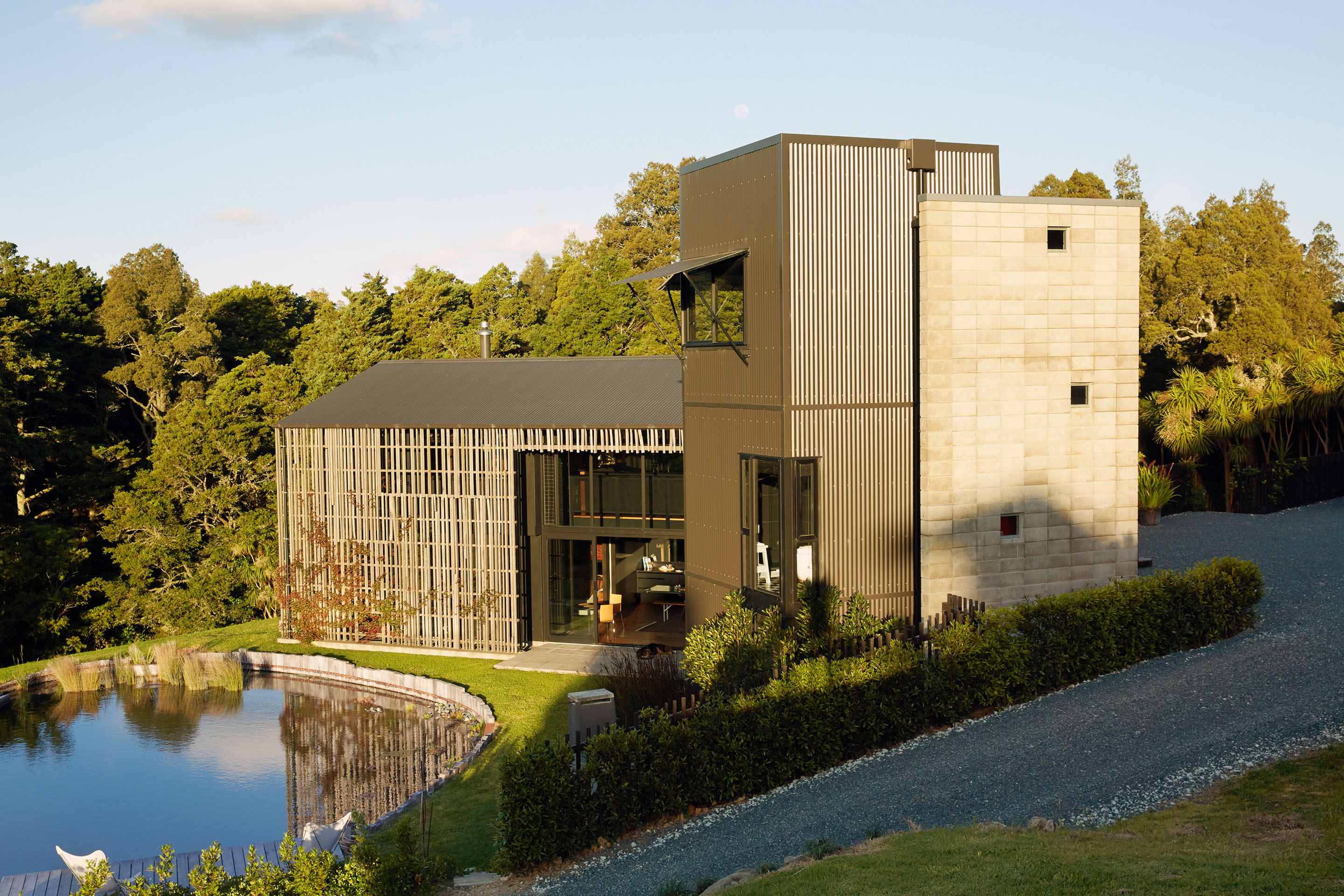 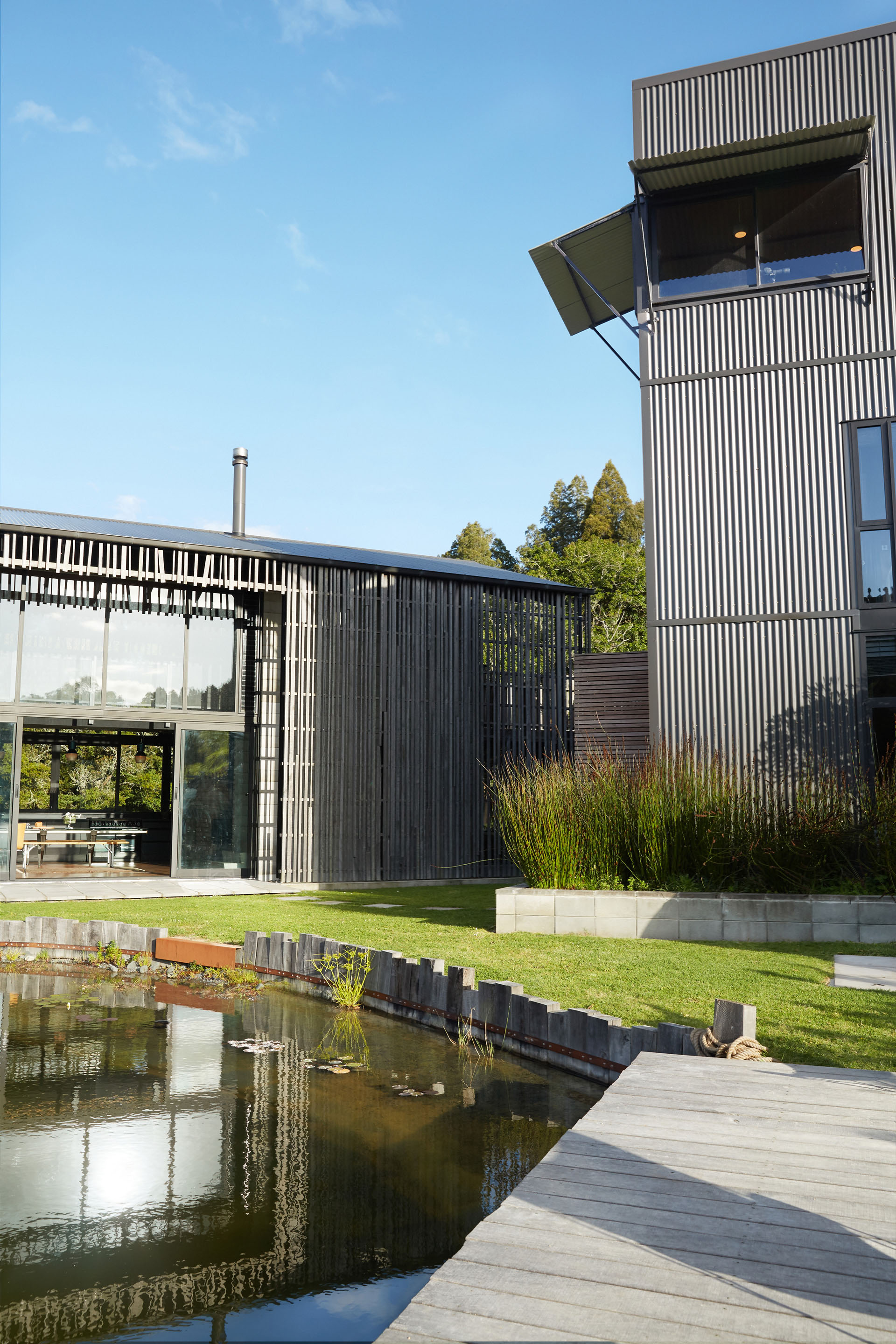 The concept of the Inland House was ‘modern farmhouse’ which seems fitting for its location, tucked away in a valley in Auckland, NZ. The corrugated iron siding was chosen exclusively for the tallest portion of the three structures and balances a sleek look with rustic materials.

A zebra can change its stripes, as demonstrated by “Dot,” the spotted zebra that stood g uard over a wood farm table set against a safari-evoking backdrop. Meanwhile, a sea of faces doodled onto whiteboard gazed upon a stark white table and complementing crisp-white stools. These constitute just a smidgeon of the 33 vignettes created by…